PLEASE NOTE:  On Saturday 24 July, the NSW Government announced a new date for Local Government Elections has been set for Saturday 4 December 2021.
This was due to the current COVID-19 pandemic and strict health orders covering the Greater Sydney region.

People from all walks of life are encouraged to stand for their community and run for election to their local council as part of a new campaign to increase diversity in local government.

The NSW Government’s Stand for Your Community – Diversity Counts campaign aims to increase the number of candidates from under-represented groups at the September 4 council elections.

Increasing Indigenous representation in local government would ensure Aboriginal culture, heritage and beliefs are taken into account when councils make important decisions for their local communities.

The Government is also determined to close the gender gap in local government. Less than a third of the state’s 1,300 councils are women and that’s why we must do all we can to increase female representation at a council level.

It is also essential that local councils reflect our culturally diverse communities which bring many benefits to the State.

People from around 225 birthplaces have made NSW their home and they practice 146 religions and speak more than 215 languages. It’s important that this rich cultural heritage and the views of our culturally-diverse communities are heard in the local government decision-making process and that councils continue to play a key role in social cohesion and harmony.

The videos will be widely promoted on websites and social media channels of the NSW Government, local councils, peak bodies, and other key stakeholders.

A range of materials including key information and resources, digital collateral, posters, and flyers will also form part of the campaign.The Office of Local Government has also launched a comprehensive online training tool and guides for candidates to provide them with detailed information about running for election and the role and responsibilities of a councillor.

More information about the Stand for Your Community – Diversity Counts campaign including videos, promotional materials and other key information and resources can be found on the Office of Local Government website here 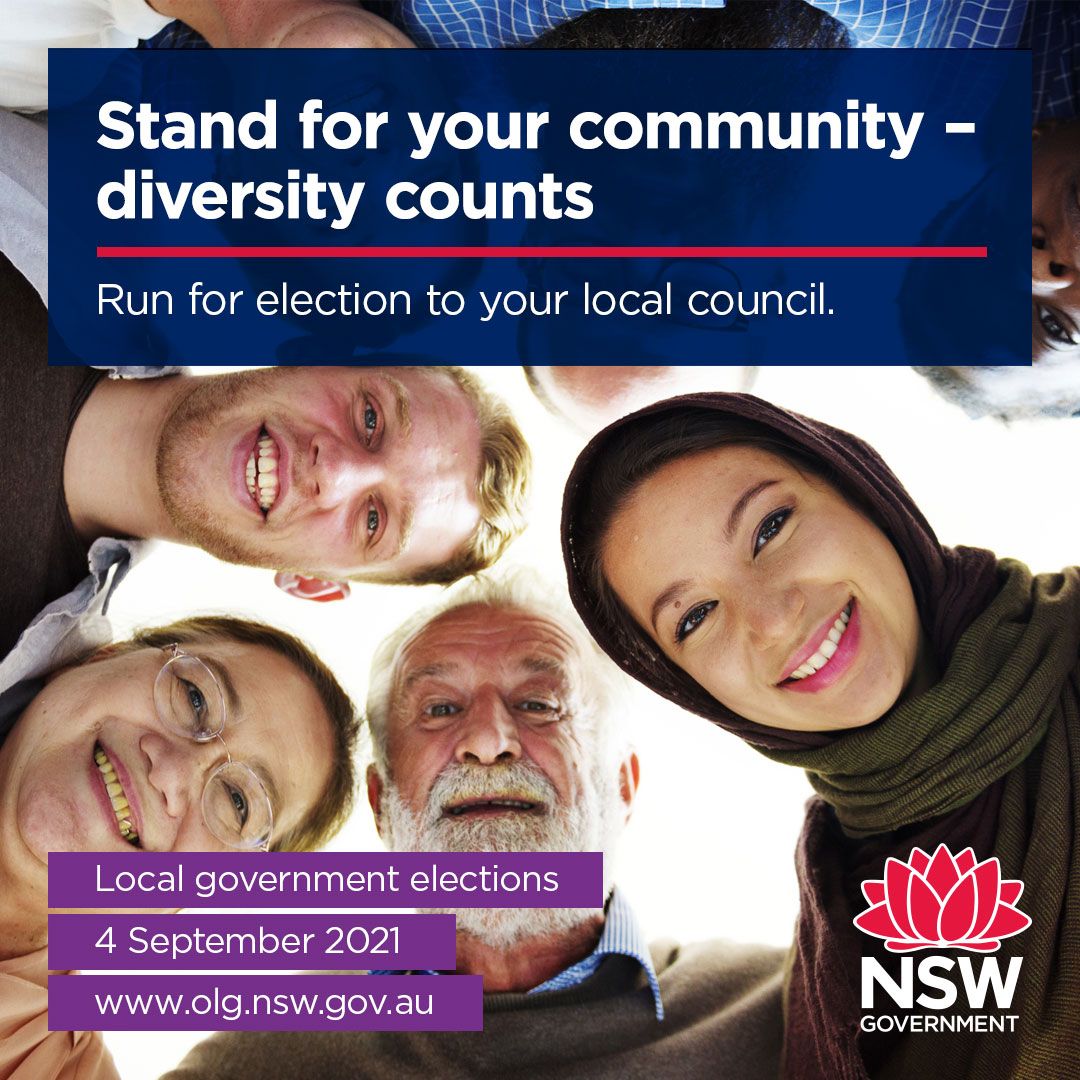 This handbook explains relevant electoral processes and procedures, however it is not a substitute for the laws which govern the conduct of an election and the participants in an election. While this handbook provides information, it does not provide legal advice. If political parties, groups, candidates or scrutineers are in doubt about any legal matters regarding the election, they should seek independent legal advice.

Prospective candidates should regularly check the website for any changes to the handbook. All of the legislation is available from the NSW Legislation website legislation.nsw.gov.au.

What is a non-residential roll?

There are two non-residential rolls:

Why do non-residential rolls exist?

The non-residential rolls provide people who are nonresident owners, occupiers and rate-paying lessees of rateable land within the council area an opportunity to have a say in who is elected to council.

Who manages the non-residential rolls?

It is the responsibility of the general manager of the council to maintain the roll of non-resident owners of rateable land and the roll of occupiers and rate-paying lessees.

After each election, the non-residential rolls lapse. Then as soon as is practicable, the general manager prepares new rolls for the next election and keeps them updated. If you applied to be on a roll previously and are still qualified to be
on that roll, you should be included on the new roll.

Is it compulsory to be on a non-residential roll if I am eligible to be?

Can I enrol and vote more than once in the same council area?

Who is eligible to be on a non-residential roll?

You must be eligible to vote at Federal or State elections to be on a non-residential roll. Your eligibility must be based on land within the council area and must not only be used as a car park.
To be on the roll of non-resident owners of rateable land, you must be:

To be on the roll of occupiers and rate-paying lessees, you must be:

and have the legal right to occupy the land, or be responsible for paying all or part of the rates on the land for 3 years following the date you apply to be on the roll.

How can I check what roll I am on?

You can check your residential enrolment at check.aec.gov.au or by calling the AEC on 13 23 26.
Contact your local council to check whether you are enrolled on a non-residential roll.

Forms must be received by the General Manager of Lithgow City Council by 6:00pm (EST) Monday 26 July 2021.